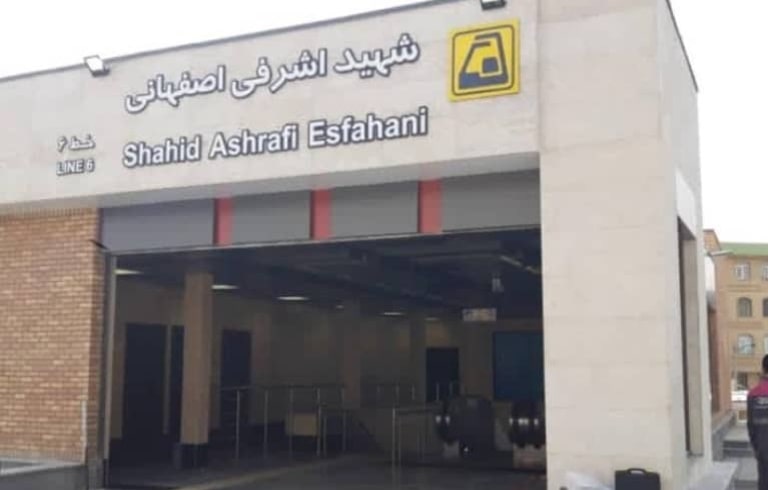 The official opening of the of  Shahid  Ashrafi Esfahani  station in Tehran metro line 6, is another outstanding and effective engineering service of Behro Consulting Engineers in the Tehran and other Iran’s metropolises metro network. This station was inaugurated and put into operation on saturday, March 16th. Shahid  Ashrafi Esfahani (U6) Station is the 21st  station of Tehran Metro Line 6, which will be opened in the first second phase of operation of Line 6. The station is located at the intersection of Ashrafi Esfahani Highway and Payambar Street in District 5 of Tehran Municipality. Shahid Ashrafi Esfahani station is located in a busy and dense area of District 5 of Tehran Municipality and adjacent to the intersection of Ashrafi Esfahani Highway and Marzdaran Boulevard, next to Payambar Street and Payamberan Hospital. by opening of the station, the access of the west and northwest Tehran citizens to the central area and railway network will be established and facilitated via Tarbiat Modarres intersection station with line 7.After demobilization of station workshop, the planted areas on the north side of Payambar Street and the northern area of under design plaza of the station area will be available to the public again. General specification s of  Shahid Ashrafi Esfahani  station  : The station is located at a depth of about 25 m and in order to facilitate physically disabled passengers, the elevators related to the entrance of the station along with its escalators will be put into operation at the same time as the opening of the station. Both (north and south) entrances of the station will facilitate citizen access to the station. The main equipment such as escalators, elevators, power supply systems of stations and railway lines, as well as tunnel and station ventilation has been manufactured inside country, installed and commissioned with the highest available standards. We can also mention operation of air conditioning system of station and office spaces, water fire extinguishing system, telecommunication system and the video surveillance of the station. Total area of Ashrafi station is about 8900 m2 . This station is designed and implemented as two unequal floors, which due to limitations in location of relevant spaces on the ground, all its ventilation systems are concentrated on the north side of the station.   The excavation method of the station is Rib-Pile method and several subsurface urban facilities, such as a water pipe of 1800 mm dia. and an energy tunnel, have been affected the executive operations. Key Features Platform Length: 140 m Construction Method: Underground – Rib-Pile method Area: about 8,900 m2 Station depth: 25 m No. of entrances: 2 All active ventilators at the time of opening: 3 (2 in tunnel and 1 in station) No. of ventilators to be installed: - Cooling and heating system for office spaces: VRF Number of escalators installed: 8 Number of elevators installed: 6 BOQ Excavation: 118,701 m3 Reinforcement: 4,775 tones Concrete: 36,000 m3 Surface Finishing: 6,752 m2 Special works in construction of the station: Design and implementation of the station as two unequal floors Crossing of high-pressure power lines through the project route restricting the height of the kiosk area Dealing with numerous subsurface urban facilities such as water pipes 1800 mm dia. and energy tunnels Completing the Building Condition Survey (BCS) to provide evidence in case of damage and perform risk analysis of buildings adjacent to station Instrumentation and monitoring, including installing ground and building subsurface pins on the ground, convergence pins inside station spaces and using instrumentation results to reduce risks. Consolidation grouting, execution of micro-piles, limited execution of fore-poling, identification and filling of cavities with foam concrete