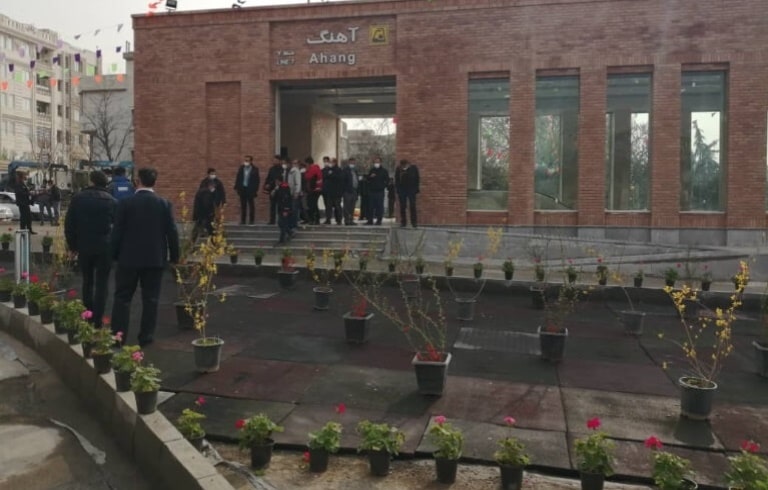 The official opening of the of Ahang station in Tehran metro line 7, is another outstanding and effective engineering service of Behro Consulting Engineers in the Tehran and other Iran’s metropolises metro network. This station was inaugurated and put into operation on saturday, March 16th. Ahang (D7) station is the 3rd station of Tehran metro line 7, which is create a suitable and pleasant urban environment with a special and different architecture. This station is located on Mahallati highway in the southeast of Tehran and provides services to the citizens of District 14 of Tehran with 2 separate entrances, which will be opened in the first phase of operation with one entrance.       This station with a depth of about 28 m is one of the semi-deep stations of Line 7, which has been constructed by open trench and underground methods. In order to provide suitable services for all citizens, especially physically disabled passengers, all necessary facilities and equipment, including 2 elevators, 10 escalators, ramps for the disabled passengers and a special route for the blind passengers have been provided at this station. Some special equipment and other facilities of this station will be completed and put into operation at the same time as the opening of this station are station air conditioning system, water fire extinguishing system, telecommunication system, video surveillance and the station's substation. Total area of Ahang station is about 9200 m2 and its depth is about 28 m. By now, cost of civil works and equipment for this station is about 1600 billion Rials and 1500 billion Rials, respectively. Ahang station is located in the District 14 of Tehran in a busy and dense area which is facing a shortage of service and recreational areas, so by constructing a station complex near the station this issue can be partially compensated. The mentioned station complex is designed in the southern part of station with a loading area of at least 7,000 m2 and building/land area ratio of 400%, as well as loading on the station structure up to a maximum of 11 floors, which in short covers an area of about 30,000 m2 and provides commercial and entertainment services, which will have a significant economic impact to cover part of the costs of the station and Metro Line 7. The use of mentioned station complex, in addition to commercial, has also been considered as a service-entertainment, which will be investigated after decision made by Article 5 Commission. Key Features Platform Length: 160 m Construction Method: 100 m: open trench with a guard structure of piles and struts and piles and anchorage, 60 m: Underground – Rib method Area: about 9,200 m2 Station depth: 28 m No. of entrances: 2, northern entrance (north of Mahallati highway) and the southern entrance (south of Mahallati highway) Number of ventilators that will be activated: 3 (2 in western tunnel and 1 in station) No. of installed escalators: 10 No. of elevators to be installed: 2   BOQ Cut: 85,000 m3 Reinforcement: 3,300 tones Concrete: 48,000 m3 Stone work: 9,300 m2 Special works that have been done in the construction of this station: The height of the ticket hall roof and as a result its special architecture and atmosphere Combined underground and open trench method Combining metro and station complex performance